The call you make to a lawmaker can make a difference

I WAS heartened to read that John Cluverius said his data are limited and represent only one study about the ineffectiveness of constituents sharing their opinions with lawmakers (“Don’t bother calling Congress,” Ideas, May 21).

My experience as a social worker and advocacy trainer has been very different. Yes, lawmakers are inundated with information. At the State House, 6,000 to 8,000 bills are considered during each two-year session. And the annual state budget contains thousands of items.

No matter how well intentioned, nobody can be an expert about, or even be familiar with, all these issues. Legislative aides, advocacy groups, the media, lobbyists, and legislative colleagues all offer perspectives. But only constituents can vote for state lawmakers, all of whom are up for reelection every two years.

My observations of lawmakers’ responsiveness to constituents’ messages is different from that of Cluverius. One suburban lawmaker, for example, had never heard of a state-funded homelessness prevention program until she received phone messages from 12 constituents. She contacted one caller for more information..

Lawmakers do listen to constituents, at least some of the time.

Cluverius stresses that constituents sharing how a policy affects them or others can be persuasive. This is an excellent message both to the thousands of volunteers who help provide vital services and to the many people who receive them, or suffer when they are missing. They have unique viewpoints. Anyone who cares about a subject that impinges on people and communities can urge lawmakers to remedy its root causes.

The writer is the author of “Make Your Voice Matter with Lawmakers: No Experience Necessary.”

THE ARTICLE“ Debate builds over shelter eligibility” raises questions, both humanitarian and financial, that should concern us.

Do we really think that, if no state-funded shelter bed is available, it is better for a child to spend a night in a place unfit for human habitation, such as an emergency room or train station, than to sleep in a motel? I find it hard to believe any lawmakers would make that choice for their children.

The costs of offering a bed to a homeless family with no place to sleep are low however you figure it. A look at the percentages is eye-opening.

Governor Baker says that if the House goes along with the Senate’s proposed rule change, which would ease a family’s access to emergency shelter, the outlay would be an additional $41 million per year. The administration projects that hundreds of additional families would enter the shelter system. Even if that were the case, an estimated $41 million out of a state budget of $39.5 billion is slightly more than a tenth of one percent. Seems like a worthwhile investment in children’s well-being.

Proponents of the Senate measure project the much lower cost of $300,000 annually, slightly less than one-thousandth of a percent of the state budget.

If my kids and I were homeless, I wonder if a lawmaker would be able to look me in the face and refer to the relative costs in explaining why we were going to experience more trauma by sleeping in a park or train station for the night.

The writer is a licensed independent clinical social worker.

AS THE daughter of Jewish refugees from Nazi Germany, I shudder at Donald Trump’s remarks about Muslims (“Raising rhetoric, Trump calls for ban on Muslim travel to the US,” Page A1, Dec. 8). His latest call to deny entry to the United States for all Muslims and to require Muslims here, even US citizens, to be on a national registry is over the top. What is even more distressing is the applause he gets at rallies for these proposals.

My parents, who escaped from Germany just in time, urged me to always keep my passport current. “You never know when things turn against Jews and you’ll have to leave this country,” they stressed. “A witch hunt, like happened to us in Germany, can erupt at any time, against any group.”

I thought they were paranoid. But I don’t think this anymore. Trump’s anti-Muslim rhetoric and the cheers he gets for it eerily sound like the kind of 21st-century demagogue my parents warned me about. I am frightened even though I am not Muslim.

I just checked that my passport is up to date, and my husband’s too. I hope we won’t have to use them. My children probably think I am paranoid. I know otherwise. 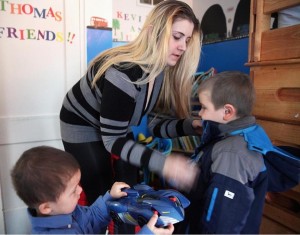 Wendy Maeda/Globe Staff
Lindsey Collins, shown with her sons Kevin and Julian, spent a night on a Quincy beach with her older boy before she could find a temporary home.

I read “Rules raise hurdles faced by homeless” (Business, Jan. 15) while thinking of my son and daughter, now grown, who never faced the shame and humiliation of being homeless.

Because of an accident of birth, they had two parents whose income provided a home and enough money for food, heat, clothes, and toys and other extras. While I am grateful that we were able to raise our children with these advantages, I wonder how they would have fared if we had become homeless after, say, losing our jobs because of downsizing or an illness or if I became a single mother with a low-wage job or received public assistance and couldn’t make ends meet.

Would we have had to stay in a place with a health or safety risk for at least one night before becoming eligible for state-funded emergency shelter, as today’s rules require? What message would my children have heard from our state government about the inherent value of people? If they saw their mother feeling guilty that she can’t protect them from harm, would they have understood that it’s not their fault, and that the failing is a misguided public policy?

As a social worker, I know that many children would blame themselves for their family’s predicament. It’s something kids do regularly.

Since our state can’t solve the problem of homeless families this year, it could change the policy to allow families to come into the shelter system when they have nowhere else to turn, without staying a night in a place unfit for habitation. Indeed, it’s the least we can do to help strengthen families in dire circumstances.

In featuring a heading over a chart outlining Governor Patrick’s revenue proposal with the words “Average Tax Burden by Income Level,” you sent the message that taxes are bad (“Patrick would hike one tax, cut another” Page A1, Jan. 17). Who in their right mind would be in favor of a burden? Mentioning taxes and burden in the same phrase just serves to reinforce stereotypes that taxes are to be avoided.

Governor Patrick outlined how increased revenues would pay for public services that we depend on. Please don’t undermine his plan by referring to taxes as a burden.

Letter to the Editor
The Jewish Daily Forward, November 29, 2012.

As a social work advocate, I was delighted to read Joel Berg’s article, “The Ethics of Street Giving” (November 16). Whether or not to give money to those who beg on the street is a dilemma many people confront frequently. The piece will help them make more informed decisions.

A more important benefit of the article is the broader picture about the causes of poverty and homelessness. Most articles about these topics stop with citing statistics and describing people in desperate situations. They omit the reality that public officials have the power to reduce the root causes of poverty — if they feel their constituents want them to prioritize that goal. Unfortunately, myths abound about the uselessness of communicating with elected officials, about the need for hundreds of comments, about the requirement to be an expert before a person shares an opinion with a lawmaker.

As Berg stresses, contacting elected officials can do more to address the root causes of poverty than “simply giving away some loose change,” as helpful and fulfilling as that can be. I hope his article will result in more messages to city halls, state capitols and Congress

The Price of Education

As I was reading “The Hidden Costs of Public School” (October 7), by Eileen McEleney Woods, I couldn’t help but think of a divorced mother of two elementary school children whom I had met a long time ago, when there were no fees for extracurricular activities. The family received public assistance after the mother was laid off from her low-wage job. Somehow she found money for school supplies, but it was the “little expenses” that caused havoc on her budget, her pride, and even her nutrition. It might be a bag of candy kids are asked to bring to a class party or a few dollars for a class trip.

When these requests came up, she often skipped dinner for a few nights, telling the children she wasn’t hungry. She also encouraged them to accept dinner invitations from their friends’ families. All I could think of was my son and daughter, roughly the same age as her children. I never had to skip a meal to save money. How unfair life circumstances can be.

Visit Arizona at your own risk

I had better visit Arizona before the immigration law goes into effect, or I’ll have to carry my birth certificate proving that I am a US citizen (“Ariz. governor signs tough immigration bill,” Page A2, April 24). I surely won’t want to bring my daughter-in-law, a naturalized US citizen from Peru. I wouldn’t want her to suffer the indignity of being questioned by police about her immigration status, and then being arrested if she forgot to take her naturalization papers. I wouldn’t want my grandchildren – US citizens – to see their mother taken away for no offense other than having dark brown eyes, brown hair, and a Spanish accent.

I wouldn’t want to bring my US-born daughter either, as she has her Jewish grandfather’s olive skin and jet-black hair. Many years ago, her grandfather was subjected to racial profiling. As he rode a bus to his Southern California home from a day trip to Mexico, an immigration officer questioned passengers who looked Hispanic to him. “Where were you born?” the officer demanded. “Brooklyn, New York,” Grandpa answered in his Brooklyn accent.

I’m glad that my mother, a 1938 refugee from Nazi Germany, isn’t interested in an Arizona vacation. But then, her skin is lighter, and she speaks English with a German accent. I guess she would be safe from suspicion, at least for now.

Too bad it takes a study to wake our society up to the obvious: Children whose parents are abruptly hauled away in workplace immigration raids suffer post-traumatic stress disorder, separation anxiety, and depression (“Immigration raids seen to hurt children’s health,” Page B8, Nov. 1).

As a social worker, I’ve seen how kids suffer when one or both parents are suddenly out of the picture. Most children believe that they must be responsible, either because they acted badly or are unlovable. Why else would a mother or father suddenly disappear, without even explaining the reason, a child is likely to conclude.

Our public officials should take a long, hard look at who is getting hurt by the enforcement of our government’s broken immigration system. Innocent children, many of whom are US citizens, should learn that the United States strives to live up to the welcoming words inscribed on the Statue of Liberty, and that those words apply equally to all people, regardless of when or how they came here.

Maria Elena Letona does a real service in clarifying that the word “illegal” should describe a person’s actions, not his personality or his existence. Far too much of today’s debate feels like a witch hunt rather than a search for a reasonable remedy. Characterizing people by their immigration status is a throwback to the not-so-distant past when people were labeled by their age, disability, or religion.